The Great Class of Dartmouth 1966

June 29, 2021 was Thad Seymour Day in Hanover. On that hot, humid morning, a group of classmates and administration officials gathered on the Green as our class gave a symbolic check for the Seymour Endowment to Christianne Hardy, Interim Director of the Dickey Center. Representing ‘66 were Al Keiller, Chuck Sherman, Terry Lowd, Paul Klee, and Jim Lustenader. Dartmates Elizabeth Lustenader and Margie Carpenter also attended. 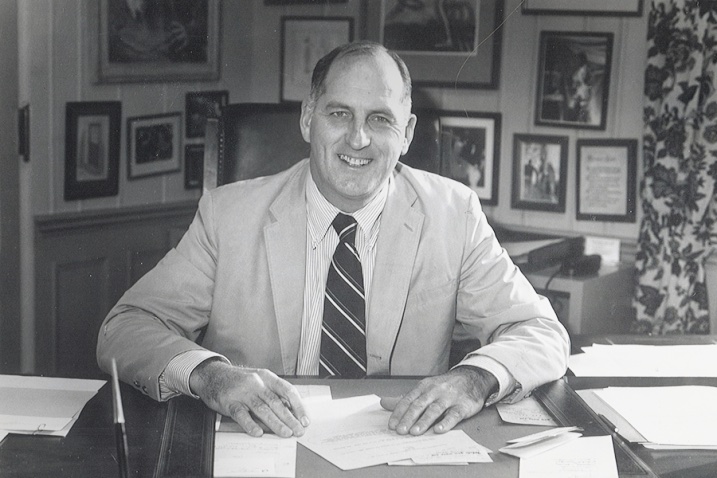 The College flag was lowered to half-staff in Thad’s honor and the ceremony began. Jim spoke as follows:

“Welcome everyone to the Dartmouth Green and the presentation of The Class of 1966 Dean Thaddeus Seymour Endowment for the Dickey Center. I’m Jim Lustenader, president of the class of ’66 — at least for two more days. Joining remotely via Zoom are about two dozen of the many classmates who donated generously to make the endowment a reality as well as members of Thad’s family, including his wife Polly, son Thad Jr. and granddaughter Annabel.

“Sweltering with me in Hanover are Christianne Hardy, Interim Director of the Dickey Center; Andrew Davidson, Vice President for Development; our own class adoptee Jennifer Casey ‘66a, Executive Director of Campaign Initiatives & Academic Coordination; Jennifer Hardy, Managing Director of the Dartmouth College Fund; EJ Keiffer who handled lowering the College flag in Thad’s honor; and various local ’66’s who came to mark this occasion on what would have been Thad’s 93rd birthday.

“Fifty-nine years ago, the class of 1966 began a lifelong relationship with Dartmouth and Thad Seymour. In the years since, we have shared many Dad Thad stories, but Rick Reiss’s thoughts on this singular individual beautifully sum up why we bonded with him so readily. To quote Rick, ‘Thad was bigger than life to each and yet he was humble, friendly, never threatening, and someone who always remembered that in addition to job one - namely learning - job two was to have fun doing job one. What I have found even more remarkable is that this giant person of so much authority and stature was only 34 years old when we were freshmen. A mere kid by today’s standards!’

“What we didn’t realize, of course, was that the Thad we knew on campus was just beginning a long life of remarkable academic and civic achievement. He went on to revitalize Rollins College, making it one of the finest small liberal arts colleges in the country, and to chair the local affiliate of Habitat for Humanity in Winter Park, Florida, from its founding in 1993, providing housing for hundreds of people.

“In planning our 55th reunion, the class Executive Committee thought about what our gift to the College should be—and then Thad passed away and the answer became obvious. For the past 25 years, the class has used its annual budget to fund two Dickey Center interns so they could pursue projects here and abroad. What better way to honor Thad than to link his name with that of “the boss,” President John Dickey, in a way that would perpetuate our support of students willing to take on, and learn from, the world’s problems?

“Coincidentally, in 1996 classmate Bob Serenbetz and his wife, Karen, set up their own endowment for Dickey interns as part of a Charitable Remainder Trust through the Bartlett Tower Society, and they agreed to use their fund Seymour Endowment Exceeds Goal: Check Presented to Dickey Center L to R: Al Keiller, Terry Lowd, Jennifer Hardy, Christianne Hardy, Jim Lustenader, Andrew Davidson, Jennifer Casey to jump start our larger effort. With invaluable guidance from Andrew and the two Jennifers, the newly named Seymour Endowment was up and running by January 2020, just in time for COVID. Despite the pandemic’s effect on people’s charitable priorities, we’ve raised almost $200,000 for a total endowed amount adequate to fund two interns every year with the possibility of adding more as the endowment grows.

“So, Christianne, on behalf of the Great Class of 1966, it’s my pleasure to present this check for $250,000 for the Dean Thaddeus Seymour Endowment for the Dickey Center. And I do so with the hope that whoever awards future internships will tell the recipients about the extraordinary man in whose name the funds are given so they will be as inspired as we were by our friend and mentor Thad Seymour.”

As of this writing, the endowment stands at just over $259,000, exceeding our goal of $250,000. Thanks to all of you who made this happen and to those who wish to contribute in the future to make it possible for even more students to become ’66 Dickey Interns.